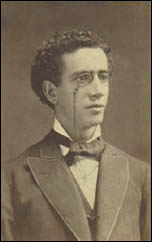 Joseph Krauskopf was born in 1858 in Ostrowo, Prussia. He was the younger of two sons of Hirsch Krauskopf, a lumber dealer who harvested trees from state-controlled forests. By the age of twelve he had finished the mandatory education of the time and began to work with his father. The business was small and the family poor, but from the work Joseph developed a love of the outdoors and physical endurance that served him well throughout his life.

At the age of fourteen his parents made arrangements for him to come to America, "the land of opportunity." He made the journey alone and traveled to Fall River, Massachusetts, where a cousin lived. There he found a job as clerk in a tea merchant's shop and began the task of educating himself, with particular emphasis on learning English.

When he heard of the founding of the first American seminary to train Rabbis, (Hebrew Union College in Cincinnati, Ohio) he applied and was accepted. 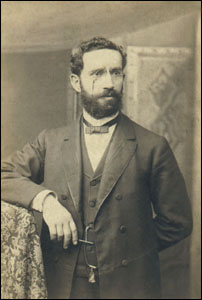 Tuition was provided on a scholarship basis, but to earn room and board he did tutoring, wrote for Jewish journals, edited a weekly paper for children, and together with his roommate, Henry Berkowitz, wrote three children’s books.

During Joseph Krauskopf's first four years at Hebrew Union College he attended high school in the morning and seminary in the afternoon. The following four years found him at the University of Cincinnati, while continuing his rabbinical studies at Hebrew Union College. He received the Bachelor of Arts degree from the University of Cincinnati in June of 1883 and in July, the same year, he was ordained Rabbi. The eight years he had spent in concentrated study set a pattern that continued throughout his life.

He began his ministry in Kansas City, Missouri. There he served with distinction for four years. He was eager, tireless, and active from the beginning in projects of social justice. He founded the "Free Labor Bureau", an interfaith project to aid the unemployed; he arranged for low-cost housing for impoverished families; he spoke out against child labor. His efforts were recognized by the Governor of Missouri, who appointed him life member of the Board of National Charities and Corrections. Hebrew Union College conferred the Doctor of Divinity Degree upon him in 1886.

The following year he moved to Philadelphia to Reform Congregation Keneseth Israel, a congregation in the forefront of Reform Judaism in America. At twenty-nine years old, he succeeded one of the most venerable and learned of Reform scholars, Rabbi Samuel Hirsch. Another man might have quaked at the thought, but Joseph Krauskopf merely grew a beard and set to work! 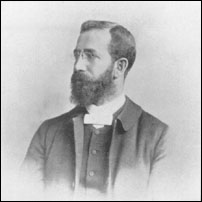 One of his first moves at Keneseth Israel was to initiate a regular weekly Sunday service, in addition to Saturday services. During the first five years of his ministry, the temple was enlarged twice to accommodate the growing congregation. While serving its needs, he was in constant demand as a lecturer before Jewish and non-Jewish bodies.

In Philadelphia he was honored as the founder of the "Patriotic Society of Philadelphia". He helped start a "Model Kitchen" to teach immigrants economical and healthful preparation of foods. He was responsible for the creation of the "Model Dwelling Association", an attempt to rid the city of slums; and, in response to his urging, the Jewish Publication Society of America was founded in Philadelphia in 1888.

The 1880's saw thousands of immigrants from Eastern Europe flock to America. Many remained in coastal cities where living conditions became crowded and unhealthy. Dr. Krauskopf believed that the problems of congested cities could be solved by teaching immigrants to farm the rich, fertile, open land in America.

In the summer of 1894 he traveled to Russia where the Jews were denied ownership of land and the opportunity to pursue agriculture, the calling of their ancestors. He believed a personal appeal to the Czar might help, but the Czar would not see him. Instead, Dr. Krauskopf spent time visiting Count Leo Tolstoy who advised him to return to America and "lead the tens of thousands from your congested cities to your idle, fertile lands..."

Upon his return to America, Rabbi Krauskopf began working to establish a school to train young men to be practical, working farmers. He recognized that to farm successfully one needed more than desire; one needed training in scientific methods. “Science with practice” was his motto. Although his school was founded primarily with the needs of young Jewish men in mind, he insisted the school be open to boys of all faiths and backgrounds.

With money he had saved from lecturing along with some donations, he purchased for his school a farm of 118 acres near Doylestown, Pennsylvania. From the proceeds of another lecture tour and some donations, he raised $10,000, which he used to erect one building that contained a classroom, dormitory rooms, dining room, kitchen, laundry, gymnasium, office and quarters for the dean. In 1896 he obtained a charter for the school, and in September of 1897 the first class of ten students came to it from all parts of the country. Education, housing, food and clothing were furnished free of charge.

Dr. Krauskopf gave his school a grand name, “The National Farm School.” It soon grew in both size and prestige. In time it became known as a model agricultural school, where theory and practice were combined. With tireless energy and persistence, he brought about success for the school, and its success brought him honors and work he never expected. 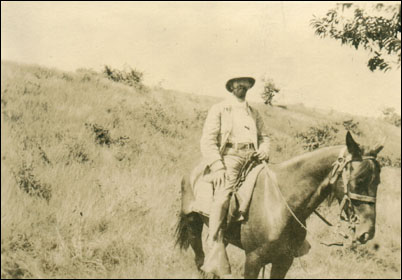 During the Spanish American War, President McKinley appointed him Special Field Commissioner to study and report on the conditions in U.S. Army camps in Cuba. Then, in 1900, the U.S. Secretary of Agriculture sent him to Europe to investigate and report on agricultural education and conditions of agriculture there. During World War I he was asked to work with Herbert Hoover as a director of the Food Conservation Commission.

Dr. Krauskopf wrote books on a variety of subjects, and his weekly Sunday sermons were published and distributed to readers throughout the world. (There are 35 volumes of his sermons in the archives of Delaware Valley College.)

Joseph Krauskopf died in 1923. The school that he founded continued to thrive. He had built well. Within twenty-five years, its property had expanded to more than fifteen hundred acres with thriving fields and orchards, herds of cattle, flocks of poultry and several greenhouses. Graduates went on to accomplish much in farm-related areas, as well as in other fields. At the school's Silver Jubilee personal commendations came from President Calvin Coolidge, from the Secretary of Agriculture, William M. Jardine, and from leaders in agriculture across America.

Rabbi Krauskopf's school was known as the National Farm School until 1946 when it became the National Farm School & Junior College, under the leadership of its president, James Work, a 1913 graduate of the National Farm School. In 1946 the Board of Trustees realized that the science of agriculture had become more complicated: research had opened new fields, students (most especially young men returning from service in the armed forces) were searching for more than a junior college education. So two years after becoming a junior college, a program of expansion was begun. Buildings were remodeled, new classrooms and laboratories furnished and the National Farm School & Junior College was accredited in 1948 as the National Agricultural College, a four-year senior college. Another change came in 1960. The school was renamed Delaware Valley College of Science and Agriculture and in 1962 it was accredited by the Middle States Association of Colleges. In 1989 the name was officially shortened to Delaware Valley College.

Many changes have taken place since the days of Joseph Krauskopf, changes indicated by advancements in science and education.

However, "Science with Practice," the founder's unique educational philosophy, still remains the cornerstone of a Delaware Valley College education. 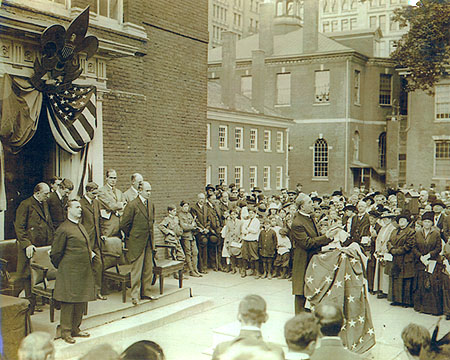 "It requires courage, moral courage, the highest kind of courage to be honest: fairly, frankly, fully honest. If you are honest, there lives not a man on earth who can humiliate you. If you have honor, though very little else besides, you have more wealth, more glory, more power, than all the hypocrites combined."
(Nov. 21, 1897)

"Tolerance of another's rational faith is the truest stamp of the genuineness and high standard of one's own faith."
(Oct. 23, 1898)

"Not yet have we grasped the scientific truth that society is an organic whole in which the welfare of all is dependent upon the well-being of each…"
(April 13, 1902)

"Happiness is never a product of external treasure. It can only spring from within, from a clean heart, from a pure conscience."
(Feb. 4, 1906)

"He who does not voluntarily do more than he is obliged to do will in time do less than he ought, and in the end will find himself unable to do what he must."
(Feb. 20, 1916)

"Our nation was conceived in simplicity and frugality, and nurtured in godliness and righteousness, and by those alone can it be preserved."
(Oct. 2, 1921)

Tribute To Dr. Krauskopf At His Passing 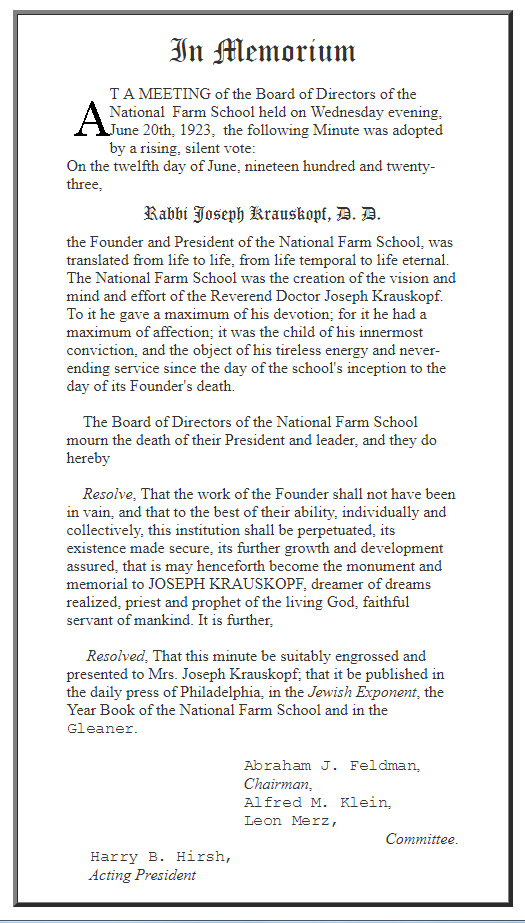 From the Philadelphia Public Ledger
(October 9, 1923):

"Monuments like the National Farm School at Doylestown are better than stones set upright in a cemetery or sculptured tablets placed in a wall. Rabbi Krauskopf's eloquence and influence have continuing life in the school he founded, and the memorial he would prefer is that of human life inspired and ennobled because of his altruism. For the first time, the master-builder was absent from the annual meeting of the institution he created, but the thousands present have taken the torch from the hand of the leader fallen and will carry it forward in his spirit for the good of generations yet to be."

"…it is indeed a great national loss that his time for constructive service should be over. The vision which twenty-five years ago he began to make a reality has today left a heritage of very real and constructive value not only to Jewry but to the whole country. The National Farm School, built under the most trying circumstances, through his endless courage and unwavering determination, is in itself a monument of which posterity will be proud. In addition, the fine qualities which Dr. Krauskopf brought to his every task cannot but leave this country spiritually richer."

From Joseph H. Appel
(of the John Wanamaker store):