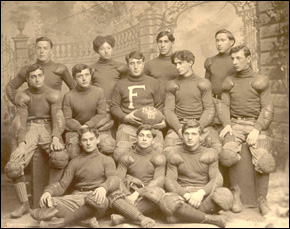 In 1897, in spite of insufficient funding and players, the year-old National Farm School found its limited number of students organizing an athletic association that would make sports a common feature of the school. The next year, the "Green and Gold Bulldog" football team, known today as the Aggies, (although both Bulldogs and Aggies would be used alternately for many years) made a courageous attempt at competition. Though their lack of experience led to a 15-5 defeat against Doylestown High School, their rigid determination later paid dividends. The next year, they played five games, four of which ended in victory (the last game was a tie).

Significant obstacles plagued the 1900 team, which won that season's one and only game. Initially, prospects for the 1901 season weren't so bright, either. Yet even with few reliable players, no coach, and numerous injuries, the team went undefeated, not allowing a single point to be scored against them in the few games played that year. In fact, the Bulldogs would not lose a game until 1905. 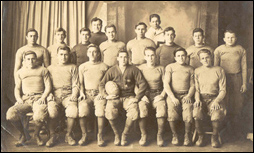 Between 1912 and 1934 the Bulldogs won a combined total of 94 games, lost 36, and tied 13 times. They would outscore their opponents rather handily, 2932 to 801, during the same stretch. It was during this period that James Work, who would devote most of his life to Delaware Valley College, first came upon the scene.

For two seasons (1911 and 1912), Work was the fastest man in track and was just as dangerous on the gridiron. Not only did he admirably serve as team captain and quarterback (his running abilities accounted for 75 percent of the team's points in 1912), but he also performed kicking-off and place-kicking duties. Not once did he miss an extra point after a touchdown. Work was also formidable as a defensive player, and served as "coach," teaching new players all he knew about football. 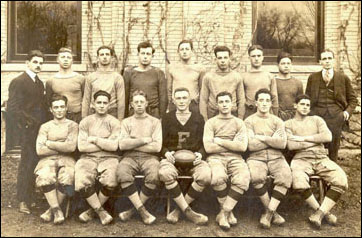 Work's graduation in 1913 did little to change his unofficial status. He officially assumed the duties of a head coach later that same year (a brave new world for NFS athletics at the time). Work's leadership served the NFS football team admirably for eight years. Though he worked without salary, Work's first four seasons saw his team easily improve over previous years' marks. For instance, the 1914 team, which played six games, scored 248 on offense, and surrendered just 20 on defense. Two of their opponents were blown out thoroughly, by scores of 79-0 and 111-0.

The teams of 1915 and 1916 enjoyed similar successes, but by 1918, circumstances such as war and an influenza epidemic saw the Green and Gold fall into mediocrity. That year, only four games played, and the team went 2-2. 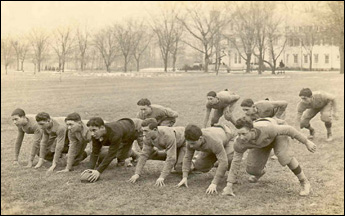 Tougher challenges greeted NFS athletics in the years following World War I as they suffered six defeats in 1920, all of which were hard fought, low-scoring battles. In response, NFS requested that Samuel B. Samuels, former NFS quarterback and baseball first baseman, organize a department where he would serve as Student Advisor and Athletic Director after his graduation from Massachusetts Agriculture College.  Because of his loyalty to the National Farm School, Samuels agreed, turning down flattering offers by other colleges to coach their teams.

One of Samuels' primary endeavors was coaching the Green and Gold football team. In 1925, Samuels inherited a team that, after Work's departure in '21, won just three games in three years. The team was winless in 1922, scoring just 19 points all year.

The hiring of Samuels as head coach quickly roused the Bulldogs out of their slumber. The team went 7-1 in 1925, followed by records of 5-1-1 (in '26) and 7-1 (in '27). The years that followed saw considerable improvement on the gridiron, with traditional rivals, like the Pennsylvania Institute for the Deaf, Perkiomen Seminary of Pennsburg, PA, and the Williamson Trade School of Media, PA, seeing defeat for the first time in years. The gridiron itself was improved as well; in October of '28, the team played their opener on a new $2,000 Alumni Field across from Lasker Hall.

Coach Samuels proved to be the savior of Farm School sports. Under his slogan "Fighting hearts can't be beat," the 1929 squad lived up to his great expectations, scoring an astonishing 323 points in ten games en route to the team's first-ever undefeated season. Football continued to be a seemingly effortless success for the Farm School for the next few years, as they followed their one-loss 1929 season with another one-loss season in 1930 and a spectacular zero-loss streak that lasted until the 1933 season, when only one game was given up.

But by the fall of 1939, a sense of uncertainty gripped the Farm School, as it did the rest of the world. World War II had begun, and the Farm School had to make sacrifices to support the war effort.

Despite the trying times, something special took place during the fall of 1942 involving Coach Samuels and his Green and Gold Bulldogs. With barely enough men to make a team, they played just six games that year, but in those six games they accomplished something no DVC team before or since has accomplished: an undefeated, un-scored upon season.

Though the final game ended in a scoreless tie against Williamson, the Bulldogs amassed 120 points on offense for the year and allowed not a single point on defense. Their biggest win was a 53-0 walloping of Boyertown (PA) High School. 1942 marked the first of three straight undefeated seasons for the Aggies. What was truly inspirational about this team was that three of the 19 players who practiced prior to the season were lost to injuries. Of the 16 who remained, only six were lettermen. The rest were freshmen and upper classmen with no previous football experience. As a result, many of these players were involved in both offensive and defensive activities.

The team's un-scored-upon streak ended early in 1943, but their perfect success would continue through the '44 campaign. The season-ending 34-0 victory over West Nottingham Academy marked the Bulldog's 20th straight win. As some programs abandoned the sport because of the lack of available men, everyone at NFS believed that eleven good players were all it took to make a contending team.