Pennsylvania Academy of the Fine Arts 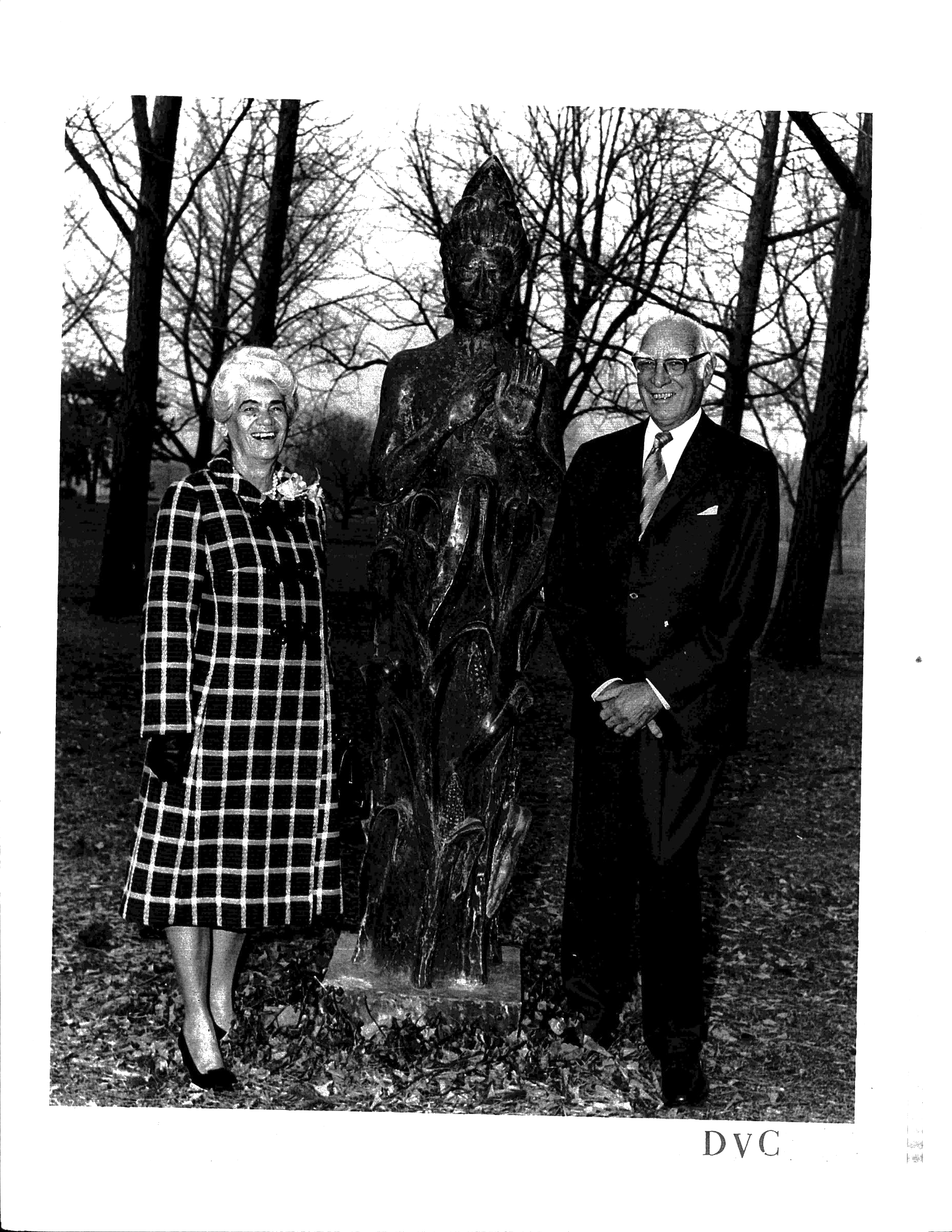 The Corn God was designed by Maragaret Wasserman Levy in honor of the 80th birthday of Leon L. Berkowitz. He was the Vice-President of the Board of Trustees of the College and had a long association with the "Farm School," founded by his uncle, Dr. Joseph Krauskopf.

The Corn God statue was vandalized in 1977. The article below repeats a common misconception, that the Corn God was female. 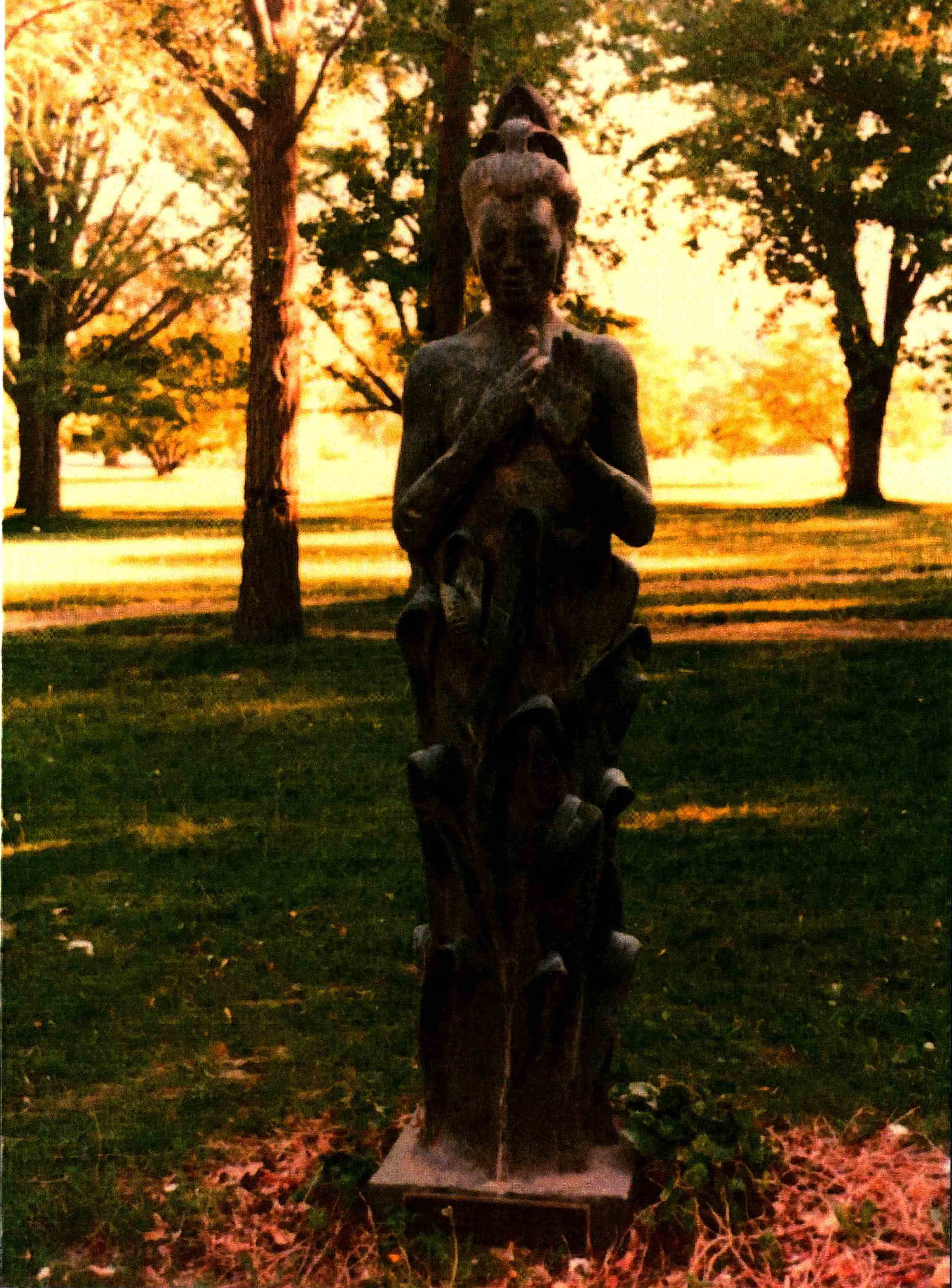 Margaret Wasserman Levy was inspired by the Mayan god, Yum Kaax. The statue depicts him wearing his traditional headdress. As protector of the forest and guardian of wild plants and animals, Yum Kaax is invoked by farmers and hunters who depend upon his goodwill.

Margaret Wasserman Levy insisted on paying full tribute to her husband as she pin-pointed the role of a sympathetic husband-engineer in the life of a woman sculptor.

Lionel rigs up the lights, does the heavy sawing, makes the bases, uses the drills and other machinery at the factory (Max Levy, Inc.-specialists in the mechanical graphic arts) and helps me solve the technical installation problems. I would be lost without him."

Lionel Levy soft-pedalled his technical assistance. "Of course, that gives me the right to say whether it is good or not," he added with an affectionate wink.

"I pretend not to listen to him," Margaret admitted. "But I do think about it, because he does see my work with fresh eyes and I often make a change later after I have thought about it. I find that the art world is divided into those who say 'never let anybody say anything about your work. It's too distracting and certainly never do what they say' and those who listen, think, and continue to learn and change and grow."

We were talking in the Levy home in Mt. Airy, a home that reflects the cosmopolitan tastes of the widely traveled Levys in ancient glass, Peruvian antiquities and Tanagra figurines, Hellenistic folk art found in graves that is more than two thousand years old.

The family of Lionel Levy has been connected with the mechanical graphic arts for 80 years. Louis Edward Levy, Lionel's father was a vital part of the Philadelphia Jewish community. He was one of the founders of HIAS and its president until the end of his life. It was then called the Association for the Protection of Jewish Immigrants.

Lionel Levy is also an emeritus Director of HIAS, has been active in both Mikveh Israel and in the Hebrew Education Society, is the ex-president of Technion, is on the board of managers of the Franklin Institute and on the boards of both the Art Alliance and WHYY, the local educational TV station.

Like Lionel, Margaret has a civic consciences and has always made her contributions to the fields in which she is interested: the Marriage Council, the Recreation Commission of the Citizens' Council, the League of Women Voters and the Visiting Nurse Service.

Now in the 36th year of their marriage, the Levys have hour children and six grandchildren. Their children are Mrs. Edgar Coale, Lewis Levy, Mrs. Edith Schniewind and Carol Levy, the youngest, like her mother, a graduate of Wellesley, now doing graduate work in landscape architecture.

"It is almost 35 years," Lionel recalled, "since Margaret first became interested in sculpture. In these years, there has been a tremendous revolution in sculpture."

"There has been a great revolution in Margaret." Mrs. Levy interrupted a little wryly. "The world has already moved on and I was unaware of it." Margaret undoubtedly referred, perhaps a little ungenerously, to her portraits, literal, but sensitively realistic. This kind of self-deprecating honesty is typical of Margaret's unpretentiousness.

What had motivated the revolution in Margaret?

"A troubled self-criticism," she answered. "A sculptor's life is difficult to begin with. It is costly. It is physically problematic. The materials are heavy, difficult to transport. A house is seldom large enough. I could go on and on."

"But," Lionel interrupted, "Margaret's work has been an enriching experience for all of us. Despite the fact that she is a reluctant salesman for her own work and has never had an agent, her work has been exhibited in many museums and galleries."

"I guess," Margaret commented, "if I counted my labor hours, I'd be lucky if I averages 25 cents an hour. But I just couldn't live without it."

The revolution in Margaret has been more a slow evolution of a poetic intuitive relationship with materials, sympathetic and often acute perceptions of  people and a perfectionist's drive towards growth.

The graceful rhythms of a torso in wood or polished bronze of the cubical angularities of a toreador's costume in black granite appeal equally to the rightness or wrongness of a curve or an angle. Mrs. Levy prefers to work directly in woods with interesting grains, in marbles of in such slow, tough, and expensive stones as granite and basalt.

"I have a few mechanical aids. I know few sculptors who work entirely by hand. But it is still a slow, slow process."

She never stops looking for unusual woods and stones on lonely beaches in Maine or Cape Cod and then adjusts her concept to the found shape or grain. A sea-rounded piece of basalt evolved into a delicately carved head that has a dream-world elusiveness.

Her portrait heads are sympathetic, competent interpretations of reality, sifted through a friendly vision. A gentle wind blowing the ruffles of her youngest daughter's party dress inspired a spiraling geometric figure in granite.

On the other hand, her "Contemplation," also in granite, is "as peaceful and contained as I could make it."

The Levys have lived near Wissahickon for 32 years, in their summer cottage on the Belgrade Lakes in Maine for 30 years. Margaret's mother, the beloved and respected Mrs. Joseph Wasserman, also a Wellesley graduate who is in her 88th year, lives close by; so do two of the Levy children, the Coales and the Lewis Levys.

In her second floor workshop large chunks of cherry, cedar, pine and boulders of basalt and granite wait their turn. One of these days the skilled hands, the responsive eyes and the cultivated sensibilities of Margaret Levy will breathe new life into them.

Mrs. Levy graduated in 1922 from Wellesley College in Wellesley, Mass., with a degree in history. After college, she married Lionel F. Levy, and concentrated on raising a family, said her son, Louis E. Levy.

then, at age 40, Mrs. Levy decided to take up a profession. "One morning I came down to the breakfast table," he said, "and she said she was going to be a sculptor. Just like that."

Mrs. Levy enrolled at the Tyler School of Art and graduated in the 1940s. She also studied at the Pennsylvania Academy of the Fine arts.

In the 1950s, Mrs. Levy began exhibiting her works in bronze, stone and wood, and sold some, her son said.

She was active in the League of Women Voters and numerous civic organizations related to conservation, beautifying the community and upgrading housing.

Besides her son, she is survived by daughters, Joan L. Coale and Carol L. Franklin, a sister; seven grandchildren; and six great-grandchildren.

Margaret Wasserman Levy, civic activist and prominent sculptor, died on January 3 at the age of 99.

She graduated as an English major in 1922 from Wellesley College and took post graduate courses in history at Bryn Mawr College.

She was a suffragette marching, with her mother, in parades to gain the vote for women. After women gained the core she was involved in the League of Women Voters working in the Government and Operations Committee and the Conservation Committee.

In Philadelphia, she was active in the City Beautification Movement, efforts the charter reform and in the creation of a City Planning Commission. As president of the Germantown/Chestnut Hill Housing Committee in the 1940s and in the early 1950s she worked to upgrade houses in the Germantown area to see that they had indoor sanitary facilities and to open Germantown and West Mt. Airy to housing for minorities. She was head of the Visiting Nurses Association and a member of the Philadelphia Orchestra committee.

At the age of 40, she became a sculptor and was an early graduate of the Tyler School of Art. She then attended the Pennsylvania Academy of the Fine Arts. Among her statues in Philadelphia are "Thrust of Spring" at International House; "Mustang I" in Blackwell Court; "Mustang II" at Germantown Friends School; "Elephant" at GFS, "Head of Henry Drinker" at the Pennsylvania Academy of the Fine Arts, "The Corn God" at Delaware Valley Agricultural School and "Goat" at St. Peter's School. Another of her pieces, "the Whole World in their Hands" was the symbol of Drexel University until it was destroyed by vandals. there were also a number of play sculptures in various playgrounds in Philadelphia and pieces in private collections.